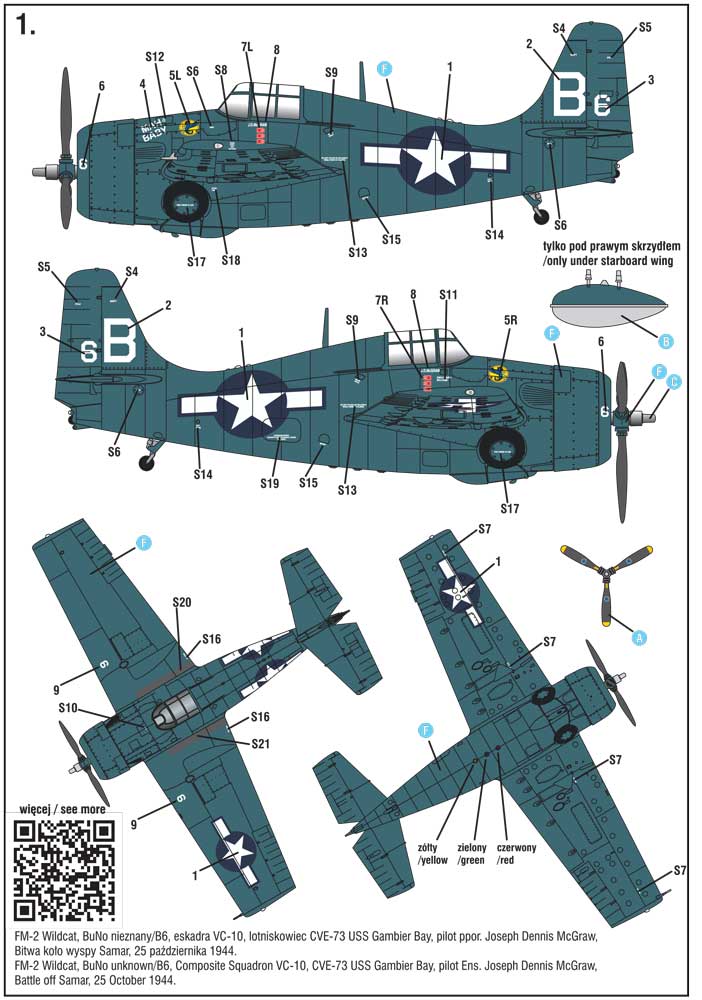 The aircraft was the last mass-produced variant of the Grumman F4F Wildcat carrier fighter. Designed at the end of June 1942 aeroplane was based on the XF4F-8 prototype. From the previous versions, the new fighter mounted a new, more powerful Wright R-1820 engine and had a higher rudder. At that time, the parent Grumman plant focused on the production of F6F Hellcat fighter planes and TBF Avenger torpedo-bombers. The production of the new Wildcat was transferred to the Eastern Aircraft Division plants of the General Motors (GM) group; hence the new name of the aircraft is General Motors FM-2.

Modifications of the Wildcat FM-2 allowed having a capable, light-weight fighter for escort carriers. The use of a new, more powerful engine with a lighter structure (and armament reduced to 4 MGs) resulted with better combat properties than its predecessor. The FM-2 aircraft could successfully fight the A6M5 Zero fighters and the Bf-109G. The vertical stabilizer was enlarged to compensate for higher propeller torque.

An additional advantage was the increased armour of the pilot’s cockpit, as well as the adaptation of the last series of aircraft to carry non-guided missiles HVAR (High-Velocity Aircraft Rockets). This modification has significantly increased the aircraft’s effectiveness in attacking ground targets and submarines.

The aircraft remained in production until May 1945. A total of 4407 FM-2 fighters were produced, which accounted for 70% of the total number of Wildcat fighters produced in all varieties. 340 aeroplanes were handed over to Great Britain, where they joined Fleet Air Arm under the name Wildcat Mk.VI.

The FM-2 aircraft were part of the air groups stationed on US Navy escort aircraft carriers (CVE). They performed tasks specific to fighter planes, such as defending fleet and landing operations against air attacks (including Kamikaze), they also successfully attacked ground targets and shipping. At the same time, in the Atlantic, in cooperation with TBF Avenger torpedo-bombers, they successfully fought German submarines.

The most famous episode of World War II, in which FM-2 fighter aircraft took part, was fought on October 25, 1944. The Battle off Samar in the Philippines. Together with Avenger bombers, they defended their aircraft carriers against a direct attack by the surface capital ship forces of the Japanese Imperial Navy. American FM-2 served well in the fight for the Marianas, Philippines, Iwo-Jima and Okinawa.

In British service, Wildcat Mk VI fought in the Atlantic, covered landing in Southern France, in operations over Norway and Denmark, and in the Far East. They were famous for repelling the Bf-109G-14 attack on the formation of torpedo planes on March 26, 1945, in the Trondheim vicinity in ​​Norway.